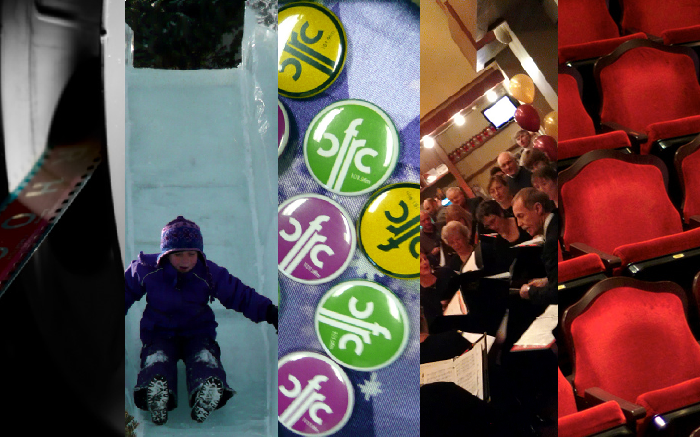 While the cold winter months are ideal for hibernation, February is proving to be a great time to get out and enjoy some of the best things Kingston has to offer. This month celebrates film with the 16th annual Kingston Canadian Film Festival, which runs from February 25th-28th and boasts not only great film but live concerts, high profile guest artists and other special events. Also in the world of film, (although it actually starts in the final days of January) we would be remiss to leave out the 17th annual Reel Out Queer Film and Video Festival, which runs at various locations until Saturday, February 6th.

For winter lovers, Feb Fest returns once again on February 4th for four fun-filled days of skating, hockey games, ice slides, maple candy and more. If staying in and getting your groove on is more your thing, CFRC will be offering a wide array of musical events from the 5th to the 14th in support of their 11th annual Funding Drive. Your donations will go towards keeping Kingston’s only non-profit, volunteer-powered, campus and community radio station alive and well.

If you’re like me, and have always wanted to sing with the Cantabile Choir, you will get your chance on Sunday, February 7th.  As a fundraiser for Joe’s MILL and Sistema Kingston, Cantabile Choirs presents their second annual sing-along, Sing, Sing A Song at Sydenham Street United Church from 2-3:30pm.  This is your chance to belt out your favourite tunes with one of Kingston’s best choirs. Admission is by donation. If you’re into theatre, towards the end of the month, in celebration of their 10th year, Bottle Tree Productions is remounting the show that started their company: Ghost of the Tree by Charles Robertson. The powerful and heartbreaking play about seven generations of Canadian women is directed by Anne Marie Mortensen and will run for one night only at The Grand Theatre February 24th at 7:30pm.

There is so much going on next month that it makes it difficult to justify staying in. This week we want to know:

Which festival/event in February 2016 are you looking forward to the most?

This list is only a handful of the great events being offered in February in Kingston, so naturally, we’ve missed  few.  Tell us about your favourite February event, or, perhaps you’re going to try out something totally new to you. We want to hear all about it so drop off your comments below.

Thanks to Dave Fancher and Benjamin Thompson for two of the photos associated with today’s post.