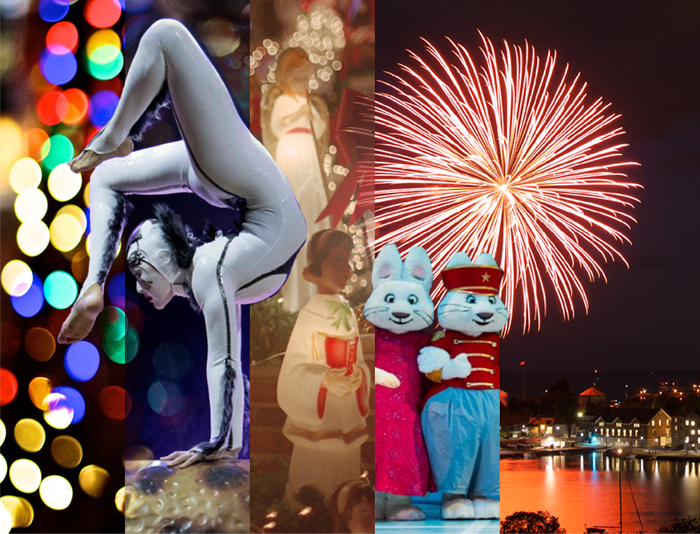 The holiday season is fast approaching, and for many of us, our calendars are already chockablock with work parties, family gatherings, and festive favourites. In spite of the hectic pace of the silly season, I’m sure you’ll agree that December is one of the best months to get out and enjoy all that Kingston has to offer. With just the right amount of snow on the ground, a slight chill in the air, and a warm cup of peppermint flavoured something or other in hand, it’s hard not to get caught up magic of the holiday season. Our top five picks for December include a healthy dose of fa la la la la, family friendly events, as well as an impressive nonfestive option.  Read on as we count down the biggest and best events in Kingston in December 2016! Hungry for more? Get your second and third helping from our community events calendar.

WinterLight, December 3rd: the MacLachlan Woodworking Museum hosts the perfect way to kick off the holiday season. Outside the museum, you can enjoy nature walks, a petting zoo, tree decorating and a camp fire (byo marshmallows). Inside, the entire log house has been transformed into an artisan market – a perfect place to pick up that special gift for that special someone. Kids of all ages can try their hand at making wreaths and other decorations, enjoy stories told by Kingston Frontenac Public Library, sing songs and delicious treats served by Farm Girl.  Of course, this barely scratches the surface of all that Winterlight has to offer, and this year’s event includes something new: a trolley to shuttle you down to the beach where you can take part in a scavenger hunt for items to fill a keepsake Christmas ornament.

Cirque de Soleil OVO, December 7th-11th: it’s been two long year’s since Cirque du Soleil’s last sold out show in Kingston, and their highly anticipated return is gearing up to be the hottest ticket in town this month.  With an additional performance added due to popular demand, Cirque’s OVO is billed as a headlong rush into a colourful ecosystem teeming with life, where insects work, eat, crawl, flutter, play, fight and look for love in a non-stop riot of energy and movement.  Featuring a cast comprised of 50 performing artists from 12 countries specializing in many acrobatic acts, OVO has has thrilled and mesmerized more than 4.5 million audience members worldwide.  Finally, it’s our turn to see what all the fuss is about, and I think it’s safe to say OVO won’t disappoint.  Tickets are going fast, but they’re still available.

O Christmas Tree, November 16th and 17th: the Cantabile Choirs’ seasonal concert is an annual tradition for many local households.  Under the direction of Mark Sirett, 270 choristers will put on three memorable performances featuring an array of carols from around the globe, as well as new works for Christmas by the Polish composer Marek Racyzinski.  Anyone who has attended a past Christmas concert by The Cantabile Choirs can attest that the most magical part of the show is when audience members join hands, come together and fill Sydenham Street United with glorious sound.  You didn’t hear it from me, but the matinee audience may be in for an extra treat, as a special friend from the North Pole is rumored to be making an appearance!

Max and Ruby, December 19th: inspired by one of the greatest musical scores ever composed – Tchaikovsky’s Nutcracker Suite – the beloved bunny siblings, Max and Ruby, take to the stage for this festive affair.  The show kicks off with Ruby trimming the tree on Christmas Eve, while Max is chasing the delicious scent of freshly baked gingerbread cookies.  A knock at the door reveals a huge parcel, which naturally leads to a retelling of the story of the Nutcracker.  Audiences will be whisked away with Max and Ruby, as their imaginations transport them to a magical land where they become characters in the beloved ballet.  This adventure is full of delectable dance, holiday magic and is perfect for the whole family.

K-Town New Year’s Eve Countdown, December 31st: last but surely not least, is quite literally the final event of the year!  As always, The City of Kingston puts on a fantastic show for all to take part in, including: outdoor wagon rides, skating in Market Square and photo booth to get a pic with that special someone.  You can skate around at the Roger’s K-Rock Centre while listening to local musicians, or take it outside and lap around the rink at Market Square while sipping warm cider. The evening and year comes to spectacular close with an impressive fireworks display over Confederation Basin. What better way to bid farewell to 2016 and ring in the New Year!