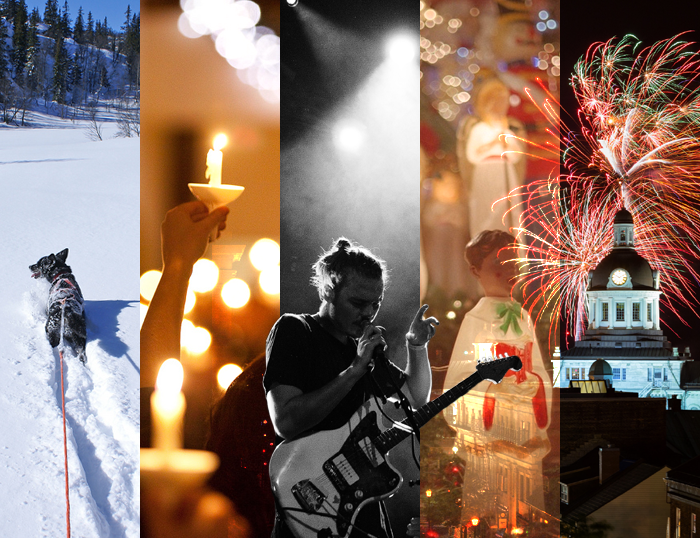 Earlier this week we unwrapped our highly anticipated annual Guide to Holiday Entertainment, featuring nearly two dozen of the city’s most colourful concerts, parties and sing-a-longs taking place during the festive season.  However, as you well know, there’s more than just candy canes, red-nosed reindeer and sleigh rides when it comes to local events this December.  Accordingly, we’ve shoveled a path through our community calendar and piled up a bunch of our most anticipated events in Kingston this month.  While our top five things to see and do in Kingston features a few festive events, it also includes a pair of essential outings you’d be sorry to miss out on.  It’s a perfect mix of indoor and wintry activities, from free to reasonably priced.  Read on as we explore the best events in Kingston in December 2015!

Outdoor Holiday Party for the Animals, 13 December 2015:  get away from the hustle and bustle of shopping in crammed department stores and standing in long lines to see the mall Santa by taking a majestic trip out to the Little Cataraqui Creek Conservation Area.  The Cataraqui Region Conservation Authority (CRCA) will welcome you and your pets for a fun winter’s afternoon in the great outdoors.  Those who make the trip will be treated to fresh air, games and the natural wildlife who call Little Cat home.  Arrive in time to meet up at the Outdoor Centre by 2 pm, and be sure to wear clothing and footwear that is appropriate for the terrain and season.

Candlelight Christmas, 15-16 December 2015: for the first time in many years the Kingston Symphony Orchestra is breaking tradition and their annual classical Christmas concert won’t be filling St. George’s Cathedral with sweet, symphonic notes.  Instead, Evan Mitchell and the orchestra are heading over to the Isabel Bader Centre’s state-of-the-art concert hall for back-to-back shows.  Concert-goers will delight in music written to celebrate the season and take joy in singing along with the Kingston Choral Society to favourite carols.  These concerts consistently sell-out, and are the perfect way to kick off the holiday season.  Don’t miss out!  Order your tickets today via The Grand Theatre Box Office.

Half Moon Run, with Folly and The Hunter, 18 December 2015:  this Montreal-based indie rock band hits up the most popular small stage in Kingston with special guests Folly and the Hunter.  On the heels of their critically acclaimed, certified gold, 2012 release, Dark Eyes, the band’s sophomoric effort, Sun Leads Me On, was released this past October.  Having toured Europe and shared the stage with the likes of Mumford and Suns, one could easily argue that Half Moon Run has crossed the imaginary line separating indie bands from legitimate folk rock sensations.  Tickets to this show have already sold out, making it an easy pick for one of the best things to do this month!  If you were fortunate enough to get your tickets early, you’re in for an amazing show!

Cantabile Choirs present Winter’s Snow, 18-19 December 2015:  a new seasonal must for our household, this magical holiday concert is so popular there are three chances to attend with very few tickets left unsold.  Under the direction of Mark Sirett, 250 glorious voices and guest instrumentalists  set out to thrill the audience with sounds of the season.  Each performance is distinct as former members join the choir for one number.  Seeing as Cantabile is celebrating their 20th anniversary this year, they’ve got a deep talent pool of alumni to draw on.  Another show you must get your tickets well in advance.

K-Town New Year’s Eve Countdown, 31 December 2015:  it should come as no surprise that our final pick for the month, is also the final event of the year!  The City of Kingston puts on a fantastic array of activities for all to take part in including outdoor wagon rides, skating in Market Square and photo booth to get a pic with that special someone.  You can also catch host of local musicians while skating around at the Roger’s K-Rock Centre, with performance by the likes of Roger James, the Georgette Fry Band, Shout Sister Choir, Sonshine and Broccoli and more.  The evening and year comes to spectacular close with an impressive fireworks display over Confederation Basin.  What better way to ring in the New Year!