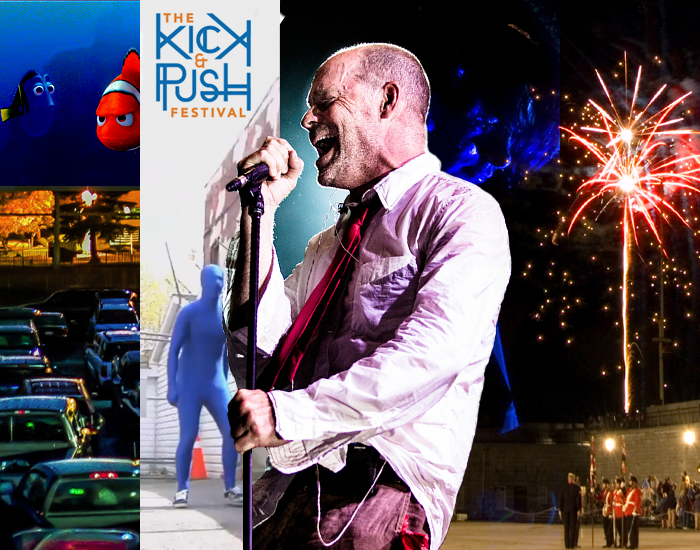 Each month we highlight five of the absolute best events in Kingston, and this month is no exception.  As much as our top five things to see and do in the city routinely celebrates of all-things Kingston, August’s edition strikes a decisively somber tone. One of our top picks for this month stems from the untimely passing of Dan Wannemacher, a man who devoted his life to creating a safe and affordable venue for entertainment, which thousands of Kingstonian’s have enjoyed over the years.  August also brings about the conclusion of The Tragically Hip’s grand farewell tour, with Gord and the lads last stop at the K-Rock Centre set much earlier than many of us would hope for.  Take it or leave it, August is happening one way or another.  Here’s to making the most of it all!

Drive-In at Kingston Family Fun World, all month long: the sudden passing of Dan Wannemacher, the long-time owner of Kingston Family Fun World, caught many of us off guard and raised concern about the future of the Drive-In, which he and his family worked so tirelessly to keep going. Mr. Entertainment, as he was known, had owned the city’s one and only Drive-In for over 20 years, keeping it afloat through challenging times including the recent transition to digital projection. To commemorate Dan’s passing, I couldn’t think of a better way to kick off this month’s top five than to encourage people to stop by Kingston Family Fun World and marvel in his vision for fun under the stars.  With numerous films worth seeing this month, a price that can’t be beat and go karts, I know I’ll taking a few extra laps with him in mind.

The Kick & Push Festival, ongoing until 13 August: the reviews are in and everybody is raving about Kingston’s summertime live theatre festival.  The K&P festival boasts six unique productions including Chicago, Ambrose, Stubborn Stone, Beneath Our Feet, Taming of the Shrew and Overlooked, as well as the inaugural Storefront Festival, classes, workshops, late night panel talks, weekday camps and more! For those of us who’ve already experienced K&P, we know to expect the unexpected thanks to site-specific performances, which takes the audience of their seats and envelops them with unique backdrops for live theatre.  In its second year, The Kick & Push Festival strives for innovation, telling old stories in new ways, new stories in old places and giving audiences a glimpse into cultural and historical spaces, in hopes they will see it in a new light.

Tragically Hip Farewell Concert, 20 August: when The Hip shocked the world with Gord Downie’s heartbreaking diagnosis and announced their subsequent plan for a cross-Canada tour, few could have guessed what would follow.  Scalpers swooped in to take advantage of loyal fans who cried foul so loud that the band agreed to broadcast the final show of the Man Machine Poem tour in Kingston live on CBC!  With hotels sold out as far away as Brockville and Belleville respectively, the City of Kingston is about to experience fandom of epic proportions.  Are we ready? You bethca!  With August 20th declared Tragically Hip Day in Kingston, and plans to screen the live stream to revelers in Market Square, what could very well be the Hip’s final show is gearing up to be equal parts celebration and one hell of a send off.

Limestone City Blues Festival, 25-28 August: celebrating its 20th year, the Limestone City Blues Festival continues to be an honest and true showcase of the blues genre.  This year’s festival is headlined by Jarekus Singleton, with other notable talents including Samantha Martin & Delta Sugar, Conor Gains & The Ramblin’ Moon, and Phil Wiggins & George Kilby also taking the to the stage.  Kingston’s blues scene will be represented by Talk of the Street, and the Canadian sensation Monkey Junk is also slated to perform.  I am once again impressed by just how outrageously low the cost of admission is ($15), and the fact there’s well over 100 hours of music programmed for you to enjoy.  Bring your lawn chair, and your dancing shoes if your so inclined!

Fort Henry’s Sunset Ceremony, 31 August: there’s still loads of summer left to enjoy, so let’s not get too far ahead of ourselves and fret about the end of vacation, the return to academic and labour-related routines, etc… To put a decisive exclamation mark on August, why not take in one of Kingston’s most popular tourist attractions?  Fort Henry’s Sunset Ceremonies take place on Wednesday evenings throughout the Summer, with August 31st being their grand finale of the season.  These ceremonies feature the Fort Henry Guard Drums, Drill Squad and Artillery Detachments presenting a period interpretation of 1860s military music and drill along with artillery manoeuvres and a simulated battle that is capped off with impressive fireworks. Tickets are a steal at $16-$18; also conveniently covered with the K-Pass.