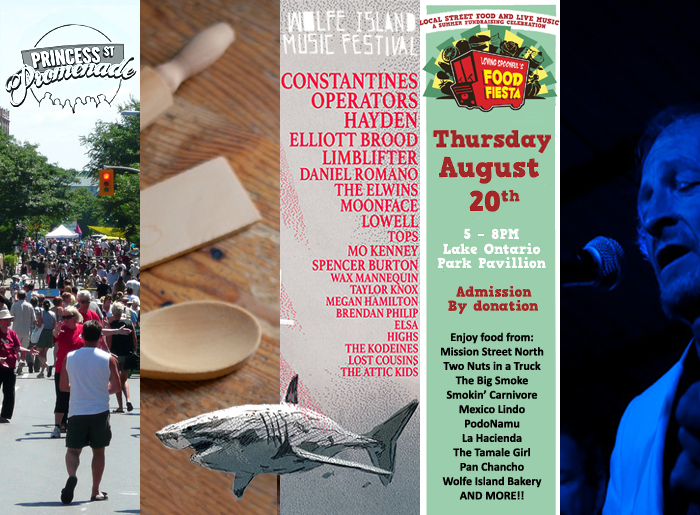 There’s so much going on in Kingston during the Summer, that it’s practically impossible to make it out and enjoy it all.  We could easily suggest 50 or 100 things to see and do around the city in August, but we continuously strive to develop a short list of absolute essentials.  From month to month, our top five features events you’ll hear about long after they pass.  The sorts of spectacles you’ll truly feel like you missed out on if you did not make it out.  It’s undeniably a momentous task that we tackle with pleasure in order to show some love for the best things Kingston has to offer! So without further ado, check out the best festivals, activities and attractions around Kingston in August 2015.

Princess Street Promenade, 1 August 2015: is there any doubt why the Princess Street Promenade was voted by our readers at the most anticipated event in August?  Celebrating its fifth year, the annual Promenade is a street festival that shuts down Princess Street to vehicle traffic to create a huge, outdoor pedestrian paradise.  The festival celebrates local businesses, community groups, sustainability and active transportation, and is a sight to behold.  Fortunately, it also happens to coincide with Stone City Ales’ 1st Anniversary (yay).  Come on down and take a stroll!

Chef Cooking Demos, 1,8,15,22, 30 and 31 August 2015:  Kingston is a city that loves to eat at our tastiest dining establishments and browse the local market for ingredients to take back home.  This is the concept behind the Chef Cooking Demonstrations, which kicked off this Summer back in early July.  With six lessons remaining, hungry foodies and curious passers-by can learn a thing or two from Sam Eddahi (Windmills Cafe), Sarah Jane MacDonald (Stone City Ales), Craig MacLennan (Harper’s Burger Bar), Clark Day (Aqua Terra by Clark) and Dale Jones (Dianne’s Fish Shack & Smokehouse).  Watch the demo, taste the creations that were made right before your eyes, and retreat to the market to get what you need to try these recipes in your very own kitchen.

Wolfe Island Music Festival, 7-8 August 2015: the ferry may be a tad smaller this year, but the festival still rock’s on!  With a line-up that boasts big names ranging from Constantines to Operators, Hayden to Elliot Brood, as well as local talents Lost Cousins, Megan Hamilton and The Kodeines, Virginia and company have delivered the goods once again.  For the uninitiated, this two-day festival is broken up into a kick-off evening affair featuring big performances at select Island locations, which is immediately followed by the main stage spectacular on day two.  Complete with camping, a dedicated party boat to shuttle festival goers to “the mainland”, the (new) Big Sandy Bay shuttle bus and did I mention the music?  WIMF truly continues to steal our hearts.

Loving Spoonful’s Food Fiesta, 20 August 2015: celebrating their third anniversary, this relative newcomer is quickly becoming a favourite for local foodies.  From the folks behind the popular Grow a Row initiative, the annual Food Fiesta is all about promoting local food and celebrating summer. Featuring over a dozen of the city’s best food trucks including Mission Street North, as well as some of our favourite local establishments such as Pan Chancho, this is a perfect opportunity to get some delicious eats, take in the scenery at Lake Ontario Park, and help fund Loving Spoonful’s community-centric programs.  This event is free to attend, however donations and generosity are greatly appreciated.

Limestone City Blues Fest, 27-30 August 2015: thankfully I don’t have a great deal to sing the blues about, but fortunately that isn’t a prerequisite for enjoying soulful and lively blues music.  Kingston’s annual Blues Festival, now celebrating its 19th year, promises performances by big names such as: Joe Louis Walker, Blue Monday, Steve Hill, Samantha Martin & Delta Sugar just to name a few.  A definite crowd pleaser, as evidenced by our readers strong support and a second place finish in our most exciting events this August. The outrageously low $15 admission will get you access to over 100 hours of music set to take place in Market Square, on Princess Street and in select clubs and city parks.  Bring your lawn chair, and your dancing shoes if your so inclined!