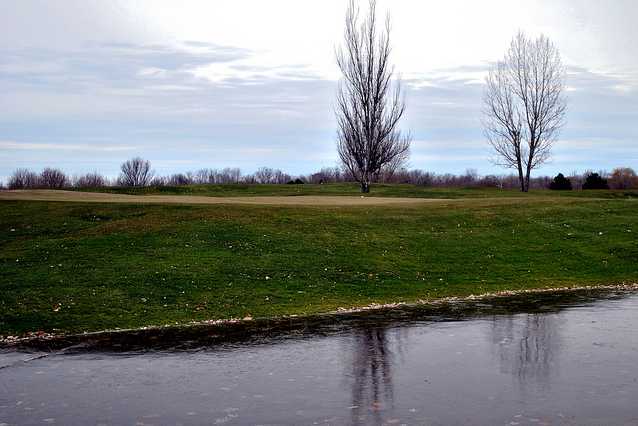 Belle Park consists of 108 acres of land situated on the western shore of the Cataraqui River. From 1952 to 1974, the area was utilized as a municipal landfill that closed as a result of mounting environmental pressures.  Part of the former dump site was re-purposed as a 9 hole golf course, which still operates 7 days a week from early April until the end of October.  Belle Park’s fairways are renowned for having some of the cheapest green and membership fees in the area, as much as 59% lower than other local courses, however that amazing deal costs tax payers and city in terms of lost revenue. Recently the Mayor and others have been critical of the fact that Belle Park has been operating at a loss that’s steadily increased over the past few years, from $15,666 in 2006 to $203,090 in 2011.  To rescue Belle Park from out of the red, staff at City Hall are hoping to study alternative operations such as transforming the site into a solar farm.  Accordingly, this week’s poll asks:

What should be done with Belle Park?

In October of 2009, a 90 acre parcel of land in neighboring Napanee was transformed into the First Light Solar Park.  At the time of its construction, First Light was the largest solar photovoltaic energy park operating in North America, producing over 10 million kilowatt hours (kWh) of renewable energy, enough to power 1,000 households.  The project created nearly 100 temporary construction jobs and 3 permanent positions, while the 126,000 solar panels are presently committed to lucrative 20-year contract with the Ontario Power Authority.  The prospect of revamping another one of Kingston’s cherished waterfront parks and developing additional sustainable energy sources is promising, as are the jobs and revenue associated with such a project.  Even so, I’m concerned about preserving the existing recreational and naturalized space at Belle Park.  To me, Belle Park should be able to accommodate current tenants, as well as further our goal of becoming Canada’s most sustainable city.

Why can’t we do both? Keep as much of the golf course as we can, invest in making it more attractive to entice golfers and raise green fees so that it won’t find itself on the wrong side of the ledger. What would you do with the remaining portion of Belle Park?

Thanks to Hilbert 1958 for today’s photo.