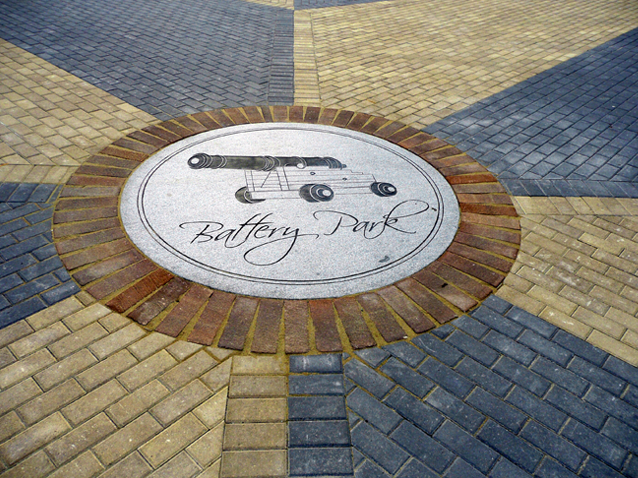 Last Monday, Mayor Rosen and Homestead Land Holdings cut the ribbon at Kingston’s newest waterfront attraction, located on the fringe of the long contested plot of land that was formerly known as Block D.  The re-purposed real estate on Block D has been developed to accommodate three towering condominiums, as well as a Courtyard by Marriott hotel, which is scheduled to open later this month.  Just beyond the parking lots, a set of stairs leads down to a massive compass rose, which is arguably the most prominent feature of Battery Park.  Strangely enough, Kingston’s newest waterfront attraction makes zero effort to accommodate the needs of boaters, swimmers and the like.

The park itself consists of a small series of meandering paved paths, complete with benches, unfinished lighting, trash receptacles, some shady spots and a few grassed areas for recreational purposes.  While Kingston’s waterfront pathway system is considerably choppy and at times non-existent, the paths at Battery Park do a fairly decent job of connecting to adjoining walkways on either end.  Forget the elaborate compass rose, as the connections to adjacent paths are undeniably the park’s most valuable feature.

As mentioned above, Battery Park is bordered by condominiums on one side, and a new, massive tumble-stone shoreline on the other.  Herein lies the rub, which is best outlined by K7 Waterfront:

In the past this 250m of Block-D perimeter was a corrugated metal seawall where boats could tie-up. It was a pretty good place for boat-passenger dropoffs and pickups when the marina’s docks were packed in the summertime. It was a fine venue for model-boat racing. It has been said that many late-summer-night skinny-dips took place there in the hours between closing-time and dawn.

This was, in short, usable shoreline which is in very short supply around here. But that was then.

Despite the heat wave that continued into the evening, last night there were many families out flying kites and kicking soccer balls around, as well as couples who were simply out for a stroll and taking in the view.  It’s great to see Battery Park finally getting used, but I have to agree with K7 Waterfront that the construction of a tumble-stone shoreline behind the pre-existing break wall  is redundant, and it unnecessarily limits the accessibility and functionality of the space.  Sadly, people are too enthralled with the grandiose compass, and they’ve yet to realize that Battery Park could have been so much more!