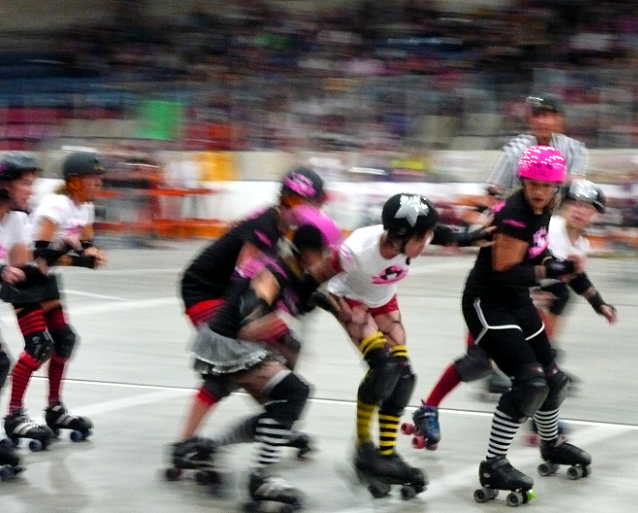 This past Friday night, along with what seemed like the entire city of Kingston, Harvey and I and a few friends had the opportunity to check out the official first bout of the Kingston Derby Girls.

When we entered the Memorial Centre shortly after 7pm, there was a buzz of excitement in the air.  The women were on the floor being introduced and the beer line had already formed.  After several garbled announcements and a half dozen gunshots (we’re still not sure what that was all about but it made for some excitement) the match between The Memorial Centre Marauders and The Disloyalists began.

With the buzz surrounding this event, a lot of people (such as myself) who knew nothing about the derby were there to have a peek.  This made for an interesting vibe.  You had the hardcore derby fans surrounding the playing area (I don’t know, is it a rink? a track? I’ll call it a rink until someone corrects me) and then a whole bunch of other people enjoying the party and taking in this sport with awe.  Because both teams were from Kingston, there wasn’t a negative vibe in the house.

I really enjoyed the whole experience from the enthusiasm spilling over from the athletes (Seriously, these women are really into this.  It was energetic, passionate and just a touch violent), to the buzz in the audience to the fact that they served Mill Street beer.

As with anything, there are always kinks to be worked out when trying something for the first time.  Things that could improve were the line up for beer, the sound system and the playing area itself.  There was only one place to purchase beer so the line was over twenty minutes long.  A second bar will help shorten the wait.  The sound system would be my biggest complaint.  As someone who only knows what Whip It taught me, I really needed to understand what the announcer was saying in order to follow the bout but the system at the Memorial Centre is pretty terrible.  Remember that SNL skit where they’re waiting for a subway and the announcer comes on and all you can hear is “mphmmmpphhmmmpph”?  Yeah, it was like that.   Lastly, I wonder if the rink will improve in time.  Are there plans to purchase an actual bowl at some point?  Being on flat ground makes it difficult for people on the floor level to see all the action and I’m sure it’s much easier for the athletes to gain speed and to take each other out in a bowl.

But really, these are minor things that, as I said, I believe will be remedied with time.  Overall, I had a great experience and just loved the energy in the room.  The absolute highlight of the evening for me was the half time performance by PELT.  These women sure know how to put on a show – and they’re super talented too.  I was making a video for the site but had to give the camera to Harvey so I could give into the overwhelming desire to dance.

Overall, I would say that these Derby Girls are onto something.  The roller derby is a fun event for everyone, a great way to show your daughters what strong, empowered women look like and a terrific party over all.  I will most definitely be back.  Thanks again girls!  A great way to end the first week back!  Be sure to check out our flickr set of this great event!

9 thoughts on “Kingston Derby Girls: Back to Cruel”