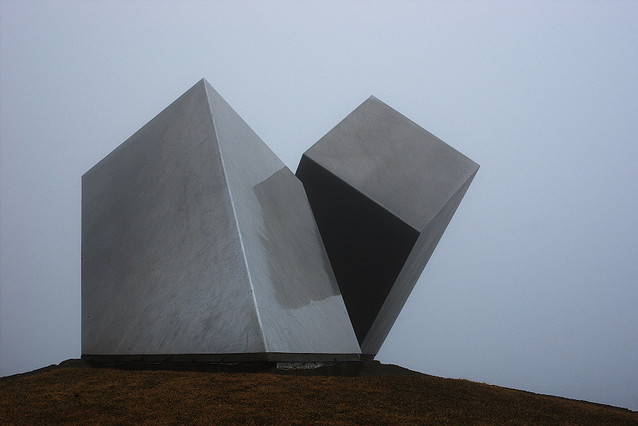 In the past we’ve talked about outdoor art and what role it does and/or could play in Kingston. We’ve also recently asked all of you what kinds of attractions you think could add to our tourism scene. The idea of outdoor art was met with positivity and many of the comments regarding tourism suggested that Kingston should focus not on new attractions, but on building and improving on what we already have. Well, one thing we have in spades, is creative people. Kingston has a particularly high number of artists of all types living here and as part of the ongoing efforts to cultivate a Public Art Policy as one component of the Kingston Culture Plan, a new project including six concurrent public artworks is set to be displayed outdoors from May 12th-June 8th.

The six works, three of which were created by local artists, and three from nationally exhibiting artists, will share the theme of “Spectacle”. An artist-guided bus tour will begin on May 12th, taking riders from one installation to the next. The project will culminate in a moderated roundtable discussion with guest speakers focusing on issues related to public art and public art policy. Curated by Xcurated Curatorial Collective, this project, entitled Art in Public Places Kingston, is using the idea of removing art from the galleries and placing it in public to raise consciousness and to cultivate an appreciation for the visual arts and artists in our community. By using public spaces, APP hopes to engage the public and generate more discussion around Kingston’s public art and developing policy.

Featured Kingston artists and associated sites include Shayne Dark at the Pump House Museum (23 Ontario Street), Michael Davidge at the Swamp Ward Window, a residential gallery space located at 448 Bagot Street, and a billboard presentation of Catherine Toews’ work. These installations are in dialogue with the work of Robert Hengeveld at Lemoine Point Conservation area, Steven Laurie at Cataraqui Centre, and artist duo Millie Chen and Warren Quigley at the site for the Anna Lane Downtown Condos at Bagot and Queen Streets.

Thanks to E Paen for today’s pic.