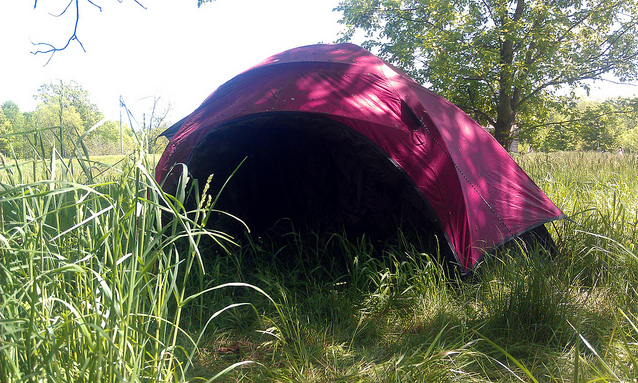 Last Friday marked the conclusion of XCurated’s Art in Public Places series, which presented various creative works by local and imported talent across the city of Kingston. Although APP’s month-long run has come to a close, today we’re taking a final look back at Robert Hengeveld’s Into the Wild. This piece was on display at Lemoine Point, and for good reason it could be misconstrued as a simple campsite in the middle of a quiet field.  As this piece is slightly off the beaten path for many, we thought it deserved a to be featured alongside our other faves.  A statement nearby reads as follows:

The work of Toronto-based artist, Robert Hengeveld, has previously been described as “modestly spectacular.” His subject matter often deals in the simple, the mundane, and the familiar – the modest. Indeed, the work displayed at Lemoine Point resembles little more than an abandoned camping tent pitched at the edge of the woods. What makes this particular tent more spectacular than others is that the backside has been cut away to create an open grotto in which strips of camouflaged nylon hang like earthy stalactites dripping from a thick, mossy cave. The sheltered portion of this tent is meant to mimic the hollow space found between thick groupings of dense, living brush. However its overtly synthetic material and deliberately bright red shell belie any natural relationship to the protected woodlands of the Conservation area. Just like a store-bought camping tent, the chimerical cavity of Into the Wild offers us a softer, cleaner experience of nature.

As a complete image – earth, tent, trees, sky, stars – this installation paints something like a reminder of our own forays into the backwoods: propelled by romantic desires to ‘get away’ to the profoundly silent, untouched hinterland that lies just beyond the pressing strictures of the city limits. In this way, Into the Wild also has something in common with the ubiquitous genre of Canadian landscape art that has played a significant role in constructing our country’s vast wilderness as a sublime and metaphoric subject akin to (colonial) National Identity itself. The absurdity of Hengeveld’s representation hints at a tension between the ‘authentic’ landscape of our cultural imagination and our own mediated interaction with it. Through the use of tents, hiking boots, windbreakers, steel knives, matches, portable stoves, bottled water etc., how much of our urban lives do we bring with us ‘into the wild’? And just how ‘wild’ is this ‘land’?

In case you missed the APP series, you can still explore the sites and works we featured: Milie Chen and Warren Quigley’s Greenroom, Shayne Dark’s Free Form in Blue, Michael Davidge’s Pretty Vacancy and Steven Laurie’s Donut Machine.  Here’s hoping the inaugural APP series is the first of many more to come, and otherwise inspires more Kingstonians to put on their creative hats and add a little bit of extraordinary to the cityscape.

2 thoughts on “Art in Public Places: Into the Wild”