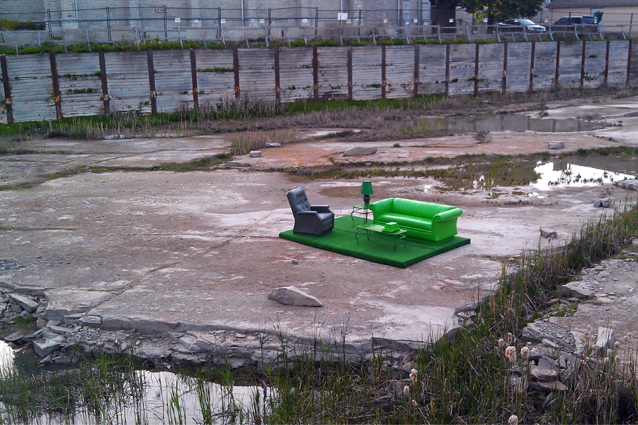 Art in Public Places (APP) showcases six different visual art installations at various locations around the city from 12 May to 8 June. The folks behind APP, xcurated Cultural Collective, intend for this project to “stimulate discussion about the role of the visual arts and creativity in civic development, while enriching and expanding Kingstonians understanding of public art in all its forms, and through these efforts, to contribute to the development of a successful and viable public art policy in Kingston.” Admitedly, I’m a huge fan of art in public places, and so we will be doing our best to showcase a few of the APP instalations over the coming weeks.

While visiting the installation at Bagot and Queen, the future home of Anna Lane, I was amused by passersby who howled as though ‘Greenroom‘ had been placed in the vacant construction pit slash nature reserve as part of an elaborate prank. If you take a few moments to stop at this location, the artists’ description of the work reads as follows:

Milie Chen and Warren Quigley’s Greenroom consists of a group of sculptures cast from actual furniture and painted in the “Field Guide to Naturalizing Greens” palette. This colour system (which was invented by the artists) mimics the act of introducing a foreign plant, animal, or person to a new environment where it must adapt to the local conditions. In this way, Greenroom also acts literally: the curators are introducing a duo of Toronto artists to the Kingston ‘art scene’ in the hopes of creating an exchange between the two cultural landscapes. When Greenroom was exhibited in the Toronto Sculpture Garden, it played a functional role: weary visitors to the Garden could rest on the couch, wedding parties would post in the dark with the lamp on, and children would use the coffee table as a climbing gym. Here in Kingston, it is an inviting, yet impenetrable scene for the possibility of future domestic comfort. Greenroom is acting like the greenroom backstage at a theatre for the condominium development that will eventually be the star of Bagot and Queen Street.

The ‘naturalizing’ palette of Greenroom also refers to the attempt at making something more ‘lifelike’, or trying to capture something ‘natural’. But Greenroom is wholly theatrical – a temporary out-of-the-ordinary artistic spectacle in the centre of our developing and redeveloping urban landscape. It is also frustratingly subtle – distanced from us by a chain-link fence that both protects the work, and isolates us from interacting with it fully. Greenroom embodies our aspirations for prized furnishing, and designer spaces but, as a public artwork, it also challenges us to consider our constructed environment in a way that juxtaposes it with the private spaces of our own living rooms.

Stay tuned for more exhibitions from Art in Public Places in the near future.  In the meantime, be sure to check out ‘Greenroom’ for yourself.  What do you think of these sculptures and their placement?