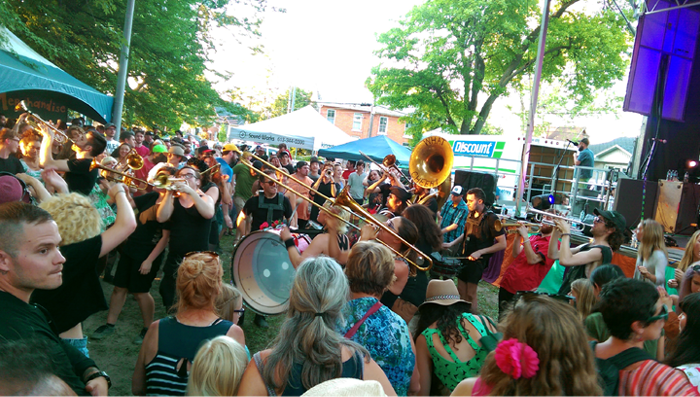 With the 2016 Skeleton Park Arts Festival’s official conclusion on Sunday afternoon, we’re riding a serious wave of awesomeness into the summer, but also feeling a wee bit sad that one of the city’s best, free summer festivals is behind us.  This year’s SPAF was billed as a return to the event’s grassroots, while it highlighted the festival’s deep community ties and its strong connection to the local arts scene.  With 5 days of programming, including an exciting lineup on Sunday, organizers packed more entertainment into Skeleton Park than ever before! The 11th anniversary of the SPAF continued the tradition of showcasing the arts, the outdoors, the neighbourhood and the solstice in spectacular fashion. It was impossible to come away from the year’s festival without a big grin from ear to ear thanks to the iconic Sloan, who served as the crown jewel at this year’s Skeleton Park Arts Festival, and the likes of Lost Cousins, Rae Spoon, Washboard Hank, Entire Cities, P.S. I Love You and the What Cheer? Brigade who kept things extra special. Enjoy some of our photos and videos from this unforgettable celebration, and be sure to be there next year when the magic happens all over again!