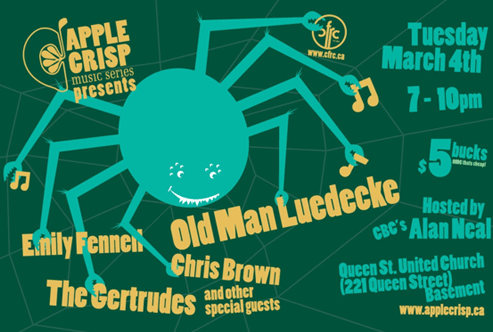 Come check out the Apple Crisp Music Series on Tuesday, March 4th. The show will be hosted by CBC’s Alan Neal and will be recorded for the new Friends of Skeleton Park CD. Not sure what I’m talking about? A group of dedicated local musicians and music lovers have worked very hard to put on the Skeleton Park Music Festival for the past two summers at McBurney Park here in Kingston. This year they are putting together a CD as a fundraiser for the event. I will be there on Tuesday to find out more so stay tuned and in the meantime, come to the show (by the way, Apple Crisp puts on an all ages show at Queen Street United every Tuesday night). Come to support local talent, hear some great tunes and have some dessert! They don’t call it Apple Crisp for nothin’.