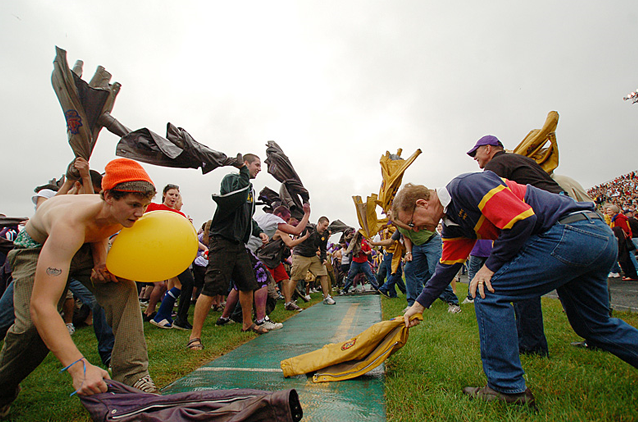 Sorry for the slow news week, but I’ve been somewhat incapacitated and locked in quarantine under suspicion of the dreaded H1.  Rest assured I am quickly on the mend, and chomping at the bit to get back on the saddle.  This weekend is as busy as any other in the Limestone City, with a full slate of events and activities.  Tonight Queen’s is being treated to an exclusive concert at the Ale House featuring Girl Talk, K-Os and The Stills, while You Say Party We Say Die will be nearby, shaking the foundation of the Queen’s Grad Club.  Tomorrow there’s Artist Demo Day at NGB Studios, and The Rural Alberta Advantage move in to destroy what’s left of Grad Club later on in the evening.  Otherwise on Saturday, hopefully the stars will align for the Queen’s Golden Gaels football team who will go yard for yard against the Western Mustangs for the 2009 Yates Cup.  In case you can’t make it to the game, tune into Principal Woolf’s twitter, as he’s usually sitting field-side at Richardson Stadium giving the play-by-play 140 characters at a time.  In case this post was too Queen’s-centric, just remember that I never want to hear you say, I want it that way.  Special thanks to Tyler Ball for today’s photo, which depicts revellers at the 2008 Homecoming showdown between the Gaels and the ‘stangs.  Homecoming…those were the days.