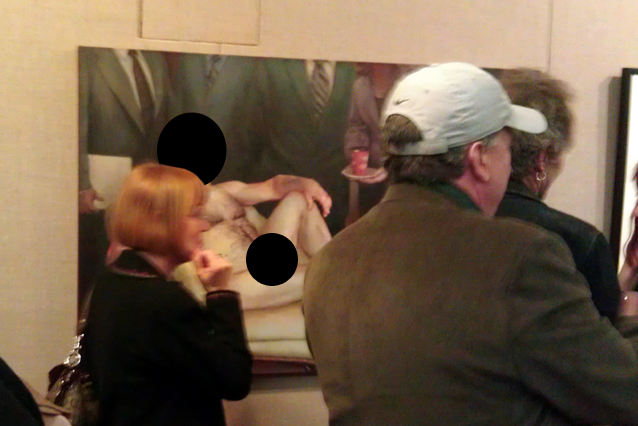 Last night the Kingston Arts Council hosted the grand opening of the 11th Annual Juried Art Salon in the packed Wilson Room of KFLA’s Central Branch. The evening included presentation of awards in categories such as: the Linda Morris Award (Grand Prize), Hilary Scanlon Award (Best Use of Colour), People’s Choice Award, Nan Yeomans Award as well as 3 Youth Artist Awards; a speech from Adjudicator Michael Davidge; as well as 40 carefully curated pieces of art ranging from photography to paintings and mixed media. Of course, some pieces drew more attention than others, including the carefully disguised painting above.  Can you guess the public figure depicted naked?

The program included comments from Adjudicator Gary Michael Dault, who had this to say about the selection process associated with this year’s exhibition:

…our task was select, from the several hundred works submitted for possible inclusion in the current JAS exhibition.  The task sounds daunting and it was.  It was one thing – rather enjoyable in itself – to scroll through screenfuls of electronic images of all the possible works and sift out the ones we couldn’t bear without.  It was quite a different matter, however, to meet a week later in the Wilson Room of the Kingston Public Library and confront our initial choices in the flesh as it were…

If you missed the grand unveiling last night, rest assured you can check out all of the artists featured via 11th Annual Juried Art Salon until May 29th.  Admission is free.