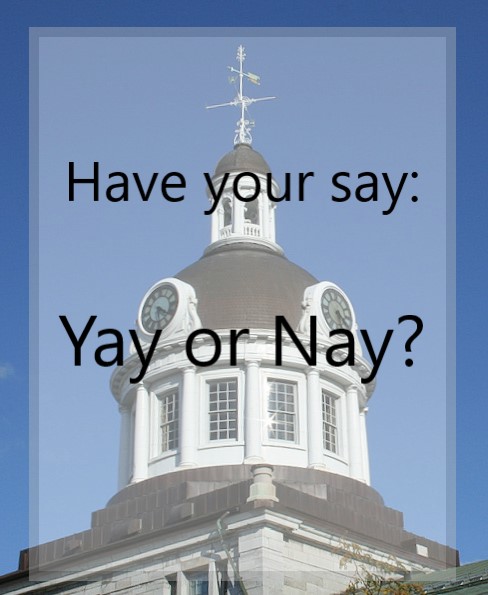 Every other week, there is undoubtedly at least one item discussed by Kingston City Council that people feel strongly about.

On the weeks when Council isn’t sitting, Council in Action takes on those items, discussing them live on air on YourTV with a panel of local media and political personalities. The show invites viewers to call in and express their opinion on the issues being discussed, or submit comments via email, Facebook, or Twitter.

We here at Kingstonist have decided to pair up with Council in Action by posing a question to our readers about the latest City Council happenings in the form of a poll. You can weigh in with your ‘yes,’ ‘no,’ or ‘don’t know,’ response, but we also encourage readers to leave comments, as well. You never know – the team from Council in Action may just read and discuss your comments on air.

“Because I had several complaints over the last couple of years, and three people complaining when I was out canvassing, I said I’d try to do something about it,” he said.

Neill explained that, while he believes that 95 per cent of issues between neighbours – such as someone blowing snow onto someone else’s lawn, or a neighbour’s downspout pour water onto your property – can be solved by simple neighbour-to-neighbour conversation, it is the other five per cent that the policy will be meant to help. One woman in Neill’s district (Williamsville) has been dealing with the same issue for the past two or three winters: directly beside her small front lawn is a parking lot for the adjacent rental properties. The landlord at the neighbouring rental building plows and blows snow onto the woman’s front lawn, all the way to the front window of her house. Despite the woman approaching the landlord over the issue, and a visit from Neill himself to the landlord, the issue has persisted, Neill said.

“So for this woman, the only thing she can do is hire a lawyer and go through an entire court process. She’s on a low, fixed pension income, and she’s just trying to hold on to her house as it is, so the idea of hiring a lawyer is simply not an option for her,” Neill said, noting that originally he wanted to develop a bylaw about this issue, but that council is unable to create bylaws regarding neighbour-to-neighbour disputes.Neill’s motion passed 11 to two, with Councillors Ryan Bohme and Kevin George voting against it. Now, City Staff will research best practices in other municipalities and develop a ‘Good Neighbour Policy,’ which will come back to Council in early 2019, Neill said. Once the policy is approved, the City will make it available online and in print, so that citizens can cite it or drop the policy off in neighbours’ mailboxes. Alternatively, Neill said, councillors could also drop the policy off if and when neighbour-to-neighbour issues arise in their districts.

“It goes far beyond just leaves and snow. It would talk about draining water onto your neighbour’s property, it deals with the idea of fence disputes – We share a fence: who is responsible for repairing it? – And that kind of thing,” said Neill.

“I think a good policy if it keeps the peace among neighbours, and if it doesn’t drive people to having to take civil action.”

So what do you think, Kingston?

One thought on “Have your say: Yay or Nay – Good Neighbour Policy”