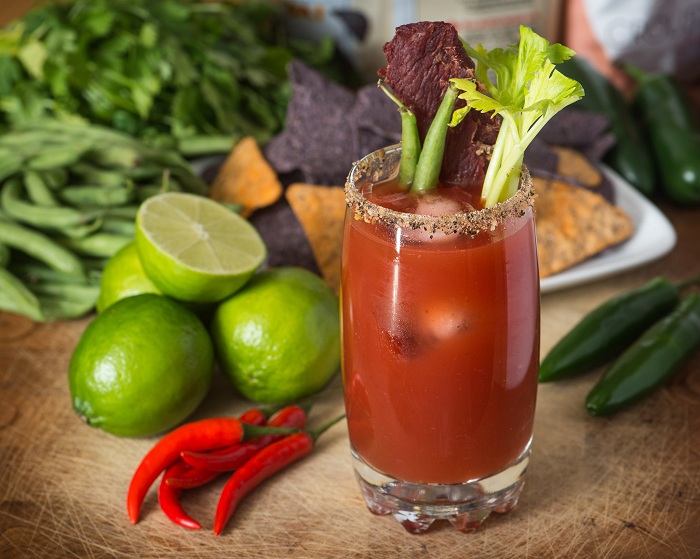 The Caesar was invented in Calgary in 1969 and has become a staple in any Canadian bartender’s recipe book. Over 350 Caesars million are consumed annually in Canada, and yet the drink remains virtually unheard of in other parts of the world. The big difference between a Caesar and a Bloody Mary is the addition of clam broth, which we find in Clamato juice – a drink that, surprisingly, was invented in New York. (Why on earth would they make this for any reason other than making a Caesar?!)

Initially, the Caesar was garnished with a celery stalk and a salt and pepper rim on the glass but over the decades, creative bartenders and restaurateurs have been adding their own touch, making the garnish more and more elaborate as they go. I have seen images of Caesars with numerous pickled items added to the celery such as olives, hot peppers and beans. Sometimes even bacon or sausage. But these are fairly tame compared to others, such as one that includes a full on slider on top and another that comes with a barbecued rib immersed in the glass.

Kingston is not lacking in the Caesar department. Many of our local restaurants have played with this quintessentially Canadian beverage. From the simple olive, pepper and pickle garnish to throwing in some horseradish and a pepperoncini (my favourite way to make one) to a full on lobster claw gripping the top of the glass, we have our fair share of delicious and creative options for consuming this tomato based drink. So this week, we’re wondering:

Who makes the best Caesar in Kingston?

Tell us about your favourite Caesar in Kingston. Better yet, tell us how you make one. As I mentioned above, I love adding horseradish. My brother’s secret is pickle juice right in the drink. My dad loves to throw in a good amount of Tabasco sauce. Every variation offers something a bit different and they’re all delicious. Did our list include your favourite place to grab a spicy Caesar in Kingston? If we missed one, we’d love to hear about it. Drop off your comments below.

Thanks to Mike Gabelmann for today’s photo.